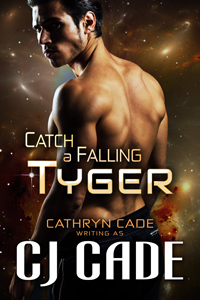 She has a star in her grasp, but this one will burn her…

As he hides from his adoring public and the paparazzi on the luxury spaceship LS Quantum, the great ship detours close to his home planet, Bryght… and into the pull of his mating moons. Now the Tyger is in mating shift–mad, bad and dangerous to anyone but a willing female Tyger.

Lucky for him, there's one available.

As she goes about her PR duties on board Quantum, she's beguiled into a tryst as shift-mate to a virile, handsome male of her race. A Tygress' sensual dream come true.

If she doesn't help him, he'll have to be tranqed until he can be transported off the liner. If she does… she'll have the liaison of her life.

There's just one, big, snarling problem… he's the reason she ran from their home planet in disgrace. The celebrity she humiliated before the entire galaxy.

And if he finds out who she really is…she may lose more than her job this time.

Chaz Jaguari, inter-galactic singing star, was hiding out. Not only from the ever more merciless spotlight of the galactic paparazzi, but from his agent, his family, and the beings who called themselves his friends.

He’d chosen to hide aboard L.S. Quantum, because a luxurious spaceship the size of a small city was the last place anyone would think to look for him.

Everyone knew that when he’d had enough of fame and adulation, he sequestered himself at one of his homes, or the home of a wealthy acquaintance.

He had no doubt that on Tygea, both his Rawr City penthouse and his country estate were being surveilled round the clock. Likewise his vineyard estate in the wine country of Pangaea, and the more recent of the many resorts at which he’d stayed in between tours.

Let them look—let them all look, and send their spy-bots and drones and robo-holovid cams after him.

They wouldn’t find him.

He’d been smuggled on board Quantum in a privacy pod, and delivered to this private suite on one of the platinum level decks. Hells, Quantum PR should call this an iridium-level suite, it was certainly luxurious enough.

He rolled his head on the exquisitely soft airpillow of his chaise lounge, just enough to look out at the miniature arboretum area, fashioned after a Pangaean tropical garden. Clever placement of foliage and flowering plants including plumquot and gremel-fruit trees in front of mirrors made the garden seem nearly endless, as if he could wander until he lost himself in a jungle of green.

Glow-lamps floated around the edges of the area, their soft golden glow like that of dusk on planet. There was even the occasional warbling trill of a bird, and the soft sound of water splashing into a pool.

And he had it all to himself.

The crew of Quantum knew only that a wealthy, unnamed being occupied the suite for the next two, possibly three lunar weeks.

And that he wished to be left completely alone, served only by his own robo-concierge, unless he invited a living being to wait on him.

The resort supplied live concierges, of course, but it was too easy for them to smuggle in tiny spy-cams. After being holovided in the lav on his first big tour, he’d learned to be very, very cautious. Better to be alone than to have his urine stream replayed across the galaxy.

Or worse, a sexual liaison.

And for the most part, when he wasn’t rehearsing, performing or interacting with his few close friends and associates, alone worked just fine for Chaz.

But right now, he didn’t want to be alone. In fact, he couldn’t bear his solitude for many more hours. He wanted, needed, craved with nearly every fiber of his being, another of his kind. A female Tyger.

Any attractive, adult female of his race would do. But she’d better arrive soon, or he wouldn’t be responsible for the damages.

In a surge of restlessness, he bolted upright off the divan, and paced across the suite, into the perfumed shadows of the foliage.

In fact, if they didn’t find him a female soon, he was going to begin shifting without her, and that would not be good… for the suite or for his public relations.

Because the slashing fang- and claw-marks of a lust-maddened Tyger were difficult to disguise as anything else.